Education for Refugees... a multifaceted driver to development 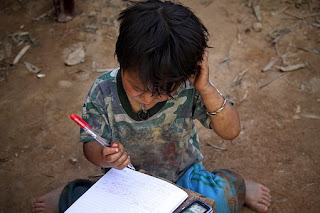 For refugees:  Education in general, in the context of an emergency, especially that of conflict/crisis, can play a “critical role in normalizing the situation for the child and in minimizing the psychosocial stresses experienced when emergencies result in the sudden and violent destabilization of the child’s immediate family and social environment” (Pigozzi, 1999, p.2). Education can be a support mechanism, supporting children and youth in their struggle to deal with their daily life challenges and with their future. When enrolled in an educational setting children and youth are able to deal with their worries, aspirations, and hopes more confidently and effectively.

Approximately one third of the population affected by the Syrian crisis is young people between the ages of 10 and 24. Being dramatically physically and psychologically impacted by the conflict, lacking chances of quality education, of security, protection and basic services results in growing frustration, hopelessness and sometimes, in ‘radicalization’ (Sirin & Rogers-Sirin, 2015) .
“There is no question that militant groups often focus on recruiting refugee “youth” (usually defined as between 15 and 24 years old), and youth on their own can become politically aware, perhaps activist or even violent. Radicalization can begin before age 15. The risk increases if young people have few opportunities for education beyond the primary level” (Sude et al. ,2015, p.5).

The same fact was explained by a Syrian mother, who lost her ‘radicalized’ son in some sectarian battle in Syria, to where he returned after failing to find an appropriate educational opportunity in Turkey:
“If a person is sick, they can get treatment and get better. If a child doesn’t go to school, it will create big problems in the future—they will end up on the streets, or go back to Syria to die fighting, or be radicalized into extremists, or die in the ocean trying to reach Europe.” (Human Rights Watch, 2015).

Access to HE has been observed to be a strong motivation and incentive for students to complete their primary, middle and secondary educational levels, because they are aware that access to HE is dependent on their completion of those levels (Gladwell et al., 2015). According to Gladwell and Tanner attending university is often listed as a primary aim for displaced students (2013).

For the countries of origin:  When actively involved and engaged in provided educational activities, family and community members can play a positive role in rebuilding family and community cohesiveness (Pigozzi, 1999).  HE, if available, can help in the development of human and social capital necessary for future reconstruction and economic development in countries of origin. A study undertaken to evaluate the impact of UNHCR DAFI  programmes for Afghan refugees, could provide evidence-based data linking refugee HE programmes to national reconstruction (Morlang & Watson, 2007). The Brookings Doha Centre recently found that when properly supported, HE can
“act as a catalyst for the recovery of war-torn countries… not only by supplying the skills and knowledge needed to reconstruct shattered economic and physical infrastructure, but also by supporting the restoration of collapsed governance systems and fostering social cohesion” (Barakat & Milton, 2015, p.1).

Research has displayed that “every additional year of formal schooling for males can reduce the risk of their becoming involved in conflict by 20% ” (Save the Children. ,n.d.-a). Therefore, quality education that is inclusive, safe, relevant and implements principles of accountability, can promote peace and development.  Economically speaking, studies have concluded that one one year of education can raise the living wage of men and women by an average of 10% (Save the Children, n.d.-b) and lead to an annual growth rate of 5% (Save the Children, n.d.-a).

For the host countries and communities:  From the host country and/or host community’s perspective, access to HE has the potential to alleviate and minimize the socioeconomic burden, by enlarging the range of productive contributors in both the economy and social life (Lorisika et al. , 2015).
In 2005 the World Bank had conducted a multi-country longtitude study about “ Education and Postconflict Reconstruction”. Despite the recognition of how much youth can contribute to the development of host countries, only few examples of practical programs that address the educational needs of youth and young adults were discovered. Those found were small scale and marginal. Host countries’ ministries usually consigned nonformal education (NFE) to NGOs and concentrated their resources and energies on the mainstream schooling system.
A recent MENA region report (Younes, 2017) undertaken for UNHCR has reached the same conclusion, highlighting a very clear lack of educational programmes in hosting countries (Jordan, Lebanon, Egypt and TUrkey) directed to SRY, leaving a huge gap between needs and demands of this crucial and vital population sector.

Despite all those benefits of HE to refugees as individuals, host countries and the original home country,  access to any kind of HE is still (as mentioned above) very limited in the context of emergency in general and the SRY in particular.  There is a set of challenges and issues leading to that limitation. Those challenges have been studied and are well documented (Gladwell et al. n.d.; Morlang & Watson, 2007;  Gladwell & Tanner, 2013; Lorisika et al., n.d.). Therefore, this research is going to focus on aspects of “impact” when access is provided and feasible; impact on refugees’ lives, realities and future. It is aimed that findings would be of use for donors and organizations eager to invest (money, time and effort) into that field, by shedding light on the critical role HE can play to rescue the now so-called ‘lost generation’.